Lomography it seems has spurred an interest in what could be called “alternative” film photography. We all have digital cameras but who still uses their 35mm film camera, not as many as you would think. Some people have taken their interest in photography to another step, seeing how a camera is made and making their own.

Pin hole cameras are not new. The first camera I used in my studies was a pin hole camera. I understand why people would want to use them. It is the most primitive of cameras. A single aperture for light, a simple shutter to open and close the aperture  and the light sensitive material.

This camera is called a “PeekFreak” camera. It is made from household rubbish. Just like most Pin Hole cameras there is no focus control and a small hole for an aperture. This camera has an interesting feature for the shutter, an old floppy disk using the slide that used to protect the disk and would slide open to read and write it now dose the same for the film.

The images below were taken with this camera and as you can see the images are quite interesting. As with all pinhole cameras there is an element of experimentation to work out where the depth of field is.

Berlin based photographers, Taiyo Onorato and Nico Krebs had for a while been turning ordinary objects into extraordinary cameras. They were looking for something to publish quickly, looking around there studio at their collection of cameras they decided it would make a great book. The book called “As Long As It Photographs, It Must Be A Camera”. The book is in two volumes the first pictures of the cameras and the second photographs created by using the cameras.

For me the turtle camera does seem a bit creepy where as I find the book camera quite intriguing. 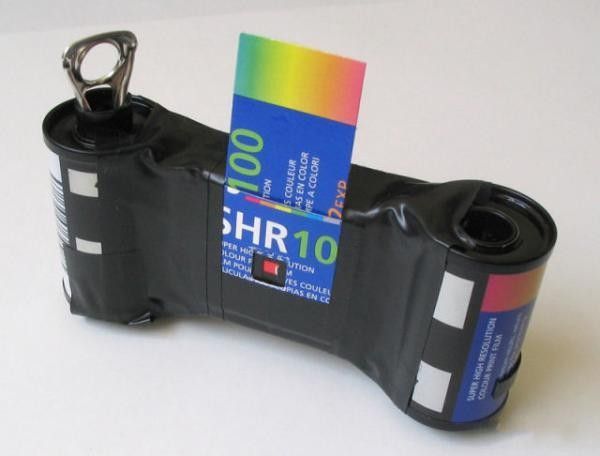 Watching a spy film especially one made during the cold war, the main character always had a miniature camera for photographing documents (now they just hack their way into the computer). The cameras I used to love were the ones that were in a lighter or a matchbox. This camera above is a less conspicuous 35mm match box camera.

This camera is made from a Pine Nut and is a  play on the words. Pin hole in English which means a hole the size of a pin and Pinolo in Italian which means Pine Nut. This camera is then a Pinolo Pin Hole camera. The nut is no bigger than the head of a pencil and the image that are created are quite small. The camera is a fantastic play on words.

If these cameras have interested you and want to make your own, you can.

This is an example of a home made 35mm pin hole camera. The camera is made out of 1mm carboard (like a ceareal box). The digram link his here. The pictorial instructions can also be found here and are similar to the ones you are given when making your Ikea furniture. I am going to try and make this over the week and and will post my success here, as well as any images.

With origami you can make cups that hold water and cute little animals and now there is a camera. The video below shows how to make an origami camera form photographic paper. The hole used to blow the camera into its shape is also the hole used to expose the picture. Once the picture is taken you just develop the paper and the what was once the camera becomes the frame for the image as well.

Pin hole cameras can be fun for everyone. Maybe think about making one and then taking pictures with your kids. This could be a great activity for them to learn how a camera works.