Sometimes I find it funny how I see an image that I haven’t seen in ages and it brings back all sorts of things from my unconscious.

Jason Salavon is a contemporary artist from Texas, who now works and teaches in Chicago. In 2003 he created these images. The images were created by grouping photographs together and amalgamating them into single pieces of art. The images above are all the centerfolds for playboy grouped by decades, around 120 images in each photograph. The images are more than layered images they show us the commonality of colour texture and form. They show us the way we as people compose images in similar near exact ways.

The playboy images show us a lot about the magazine as well as the readership. The magazine is from one point of view a showcase of beauty of the female form. The pictures show tall slim women that fore fill what you would expect. The poses of the images are possibly all similar as there is not much spread of skin tones outside the central third of the image. As a viewer this composition gor this type of  image is what we expect. The blue tones surrounding the images give a coldness that belongs to the colour and that is contrasted by the warmth of the models skin tones. The images also show a possible change in taste of the readers or maybe the magazine has changed its social status. The last two images for the decades of the 80’s and 90’s show bands of colour that you can guess are underwear, which is not present in the earlier decades. The styles and fashions of the decades are also represented with the shifting in the position of the hair and as the decades move on the colour seems to go from a brown to a faint blonde.

The images above are real estate images grouped by location and all the original images were taken in 2003. Just like the Playboy Center Fold images they can give us a lot of detail with no sharpness in the image. The images tell us about the climate, the environment and even for fills our expectations of the cities.

Death Cab for Cutie wrote a song “Why you’d want to live here”, in the song the singer sings;

“I’m in Los Angeles today, it smells like an airport runway. jet fuel stenches
In the cabin and lights flickering at random.

I’m in Los Angeles today, garbage cans comprise the medians of freeways always
Creeping even when the population’s sleeping.”

The song describes LA as a polluted city, full of grey buildings and freeways crisscrossing each other. The image from the song is one I think of but the real estate pictures show something different. LA the third picture on the top row, shows a collection of low profile buildings light blue skies and yellowing grass. The idea of climate comes from the grass, with it being hot and the grass being yellow. This Image then tells me something about the housing economy in LA the houses for sale were in the suburbs because who would want to life in the city. Maybe the idea of Hollywood runs through the image. What we see is not real even in advertising for homes.

Other cities like Seattle with its grey tone from the fog that fills the city and Texas and Miami with their deep blue skies rightly confirm my predictions of how these cities feel. His other images tell us more about our collective unconscious, how we expect an image to look. This amalgamation of newly wed pictures, have the bride and groom in the same position standing at the same side. Do we all take images of objects the same? Is there something inherently pleasing about this balance of composition? Or do we all see the world through pre-determined eyes?

Idris Khan British photographer had followed a similar experiment with “amalgamation photography”. His works are in permanent exhibitions all around the world. The images below are simple and show us how repetitive our architecture is. The images challenge us to see buildings not as individual homes with personality but of units of practicality.

For me these images force me to question the way I see an image and how I see the world. Questioning; Do we all see the world the same?

In a world which is very much in a photographic age I can react to an image so quickly with a glance knowing (guessing) what the meaning or purpose of the image is. Have we been so indoctrinated that now we understand (presume) so much from an image with so little time. I think about wedding, and the bride asking for the “classic” shots. If I see a female face on a billboard before I have read the advertising I can say with certainty it is for cosmetics.

I also feel that I am being questioned about how I take photographs. I write a lot about digital photography and its changes to the way we see the world and how we interact with the photographs. For me this is one of my hurdles I am trying to get over in my mind.

I decided I would try and replicate these amalgamation images. I wanted to start with images that are near common at the moment in our mind. It has seemed lately people like to share and photograph their food. When I think of these images I think of coffee. I went online and gathered pictures of coffee that were taken and then shared with Instagram.

The picture was quite surprising as in all the images the coffee was drunk from white cups and all seem to have a similar shape. When I think of my cups at home they are different colours with differing forms of shape. To me these pictures seemed to be taken at a coffee house or restaurant. There is a strong sense of topping on the coffee, not just a plain cup of black but a milky creamy coffee with dark areas which you can assume is chocolate. The image does not give details of what the cups were sat on as there is no clear tone and the fine points are quite washed out. I believe with more pictures it would show us more information.

The amalgamation shows that all the images were composed with the cup in the centre of the frame with the camera looking down. This is a nice composition because your eye is drawn down into the cup due to the circular shape in the square frame. But it also shows us that it is the shape that is important for the cup not the handle as it is in several different places.

The image for me is an experiment but I am sure with more pictures (perfectly about 100) then I could really say more. I feel just by looking at the image that it is of a cup of coffee. My conditioned mind is telling me that coffee should be in white cups, and although you would think a picture of coffee would be black it isn’t it is more cappuccino and latte with the Starbucks/barista toppings. The images make me ask, when do people take pictures of their coffee is it because they are out enjoying themselves and want to share the experience or do they not see their “cup of joe” as such a good image. The composition of the images was interesting as all the images have nearly the same structure.

The second image which has been seen recently is the image of Tower Bridge in London and the Olympic rings. 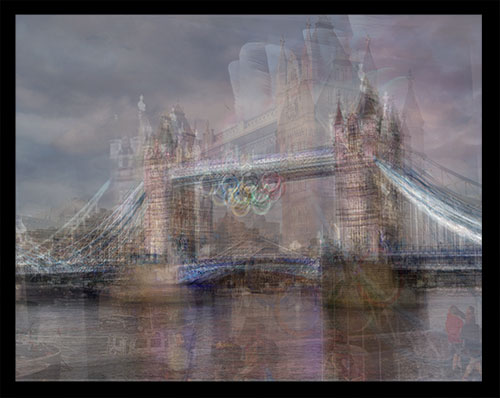 When collecting these images I was specific that they all need to be taken from the same bank of the river Thames and needed to have the Olympic rings. I was expecting really just snap shots but I added any that I came across. This time it was 13 images, and compared to the coffee cups they had less opacity each layer.

The first thing that struck me again was the composition. The two towers of the bridge straddle nearly the middle third of the image, even with photos which were taken at much different angles. What this amalgamation shows is a cloudy over cast London. Whenever it rains here in Poland I am asked if I feel at home. The stereotype of; the grey sky, wet and damp England is quite strong and to re-enforce this unfair stereotype is this image. The pictures could have been taken all on the same day but I think that would have been quite a coincidence. Another thing the image brings out is the busyness of the city there seems to be a lot of movement in the foreground, an area I would guess is pedestrianized from the angle of view as well as the movement on the water. Looking at the structure of the bridge is in a ghosting way a very detailed image. This tells me that people have stood in and around the same spot to take their pictures at nearly the same angle.

Is the image of tower bridge so Iconic in this scene that we want to replicate it ourselves?

For me these images share something that however much we try to be an individual there is an aesthetic pleasantness to certain compositions of scenes. The images Jason Salavon are like flick books or movies but seeing all the frames at once. Whereas Idris khans images show us that although we like to see something as unique and individual but in the end it all comes to being the same.

The images also make me want to change my photographic eye, to take a picture in a different way. By this I mean look at a scene and think how do people see it and  what do they miss and then aim for this. This has made me want to make my work stands out so it is not seen as just another picture in the collective memory.