Last week I said i wanted to do more than re-edit HDR Images on Fridays, well this week it is another HDR Image. I am actually doing quite a bit of re-editing / touching up of images at the moment because I am preparing a collection for a competition.When they are ready I will showcase them on here.

This week I am going back to the Summer. Summers in Poland can be hot, it is normal to top 30 degrees in air temperature and the ground temperature can feel higher. The one great thing about having these dead heat moments is that you know a storm is coming. 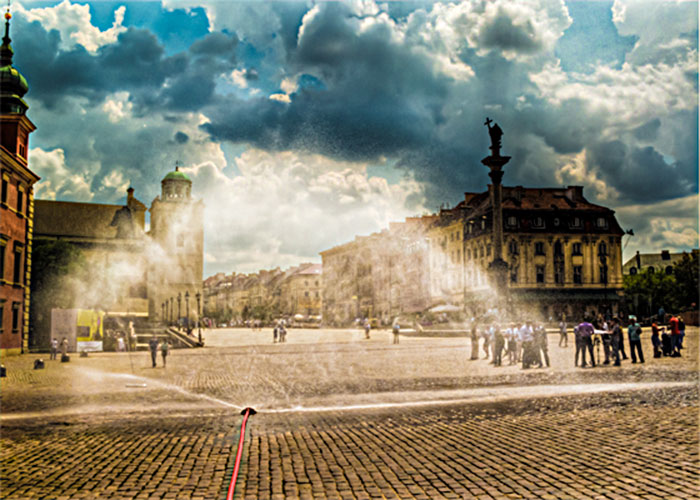 This was taken in the Castle Square looking out of the old city. It had been an incredibly hot day and the city had set up temporary fountains. I can only speculate why they did this but for me they made a great picture oppertunity.

The image that i edited was poor and I am quite ashamed of it, there is so much saturation in the blue in the clouds it looks unnatural. These orange tones where have they come from?

The one thing I like about the image is the difference In the feeling from the world out side the spray to the world you can see through it. This is something i wanted to focus on.In a way everything around the spray has become the frame for the image inside the spray.

The first thing i did was reevaluate the raw image.  Looking at it the image i decided a black and white conversion would be best. The image has a lack of colour saturation except in the sky and  the red hose.

In Camera Raw i croped the image tighter on the water spray and the adjusted the overall expousre. I brought it down a small amount and then carried on with my camera raw workflow.

In Photoshop I masked my second layer to reveal the spray area. Next I duplicated the layers into a new document and merged them together. With the new document I split the channels and chose the red and green channel images that were created.

I decided on the red and green channels because the red preserved the tone of the sky while the green kept good tones for the spray. I placed them as layers on top of each other and used Image calculations to merge the image together. I then converted the layers into a smart object and added a small levels adjustment and dodged the image outside of the spray and burnt in the spray a bit. I added a slight sepia toning to give the image a bit more strength. 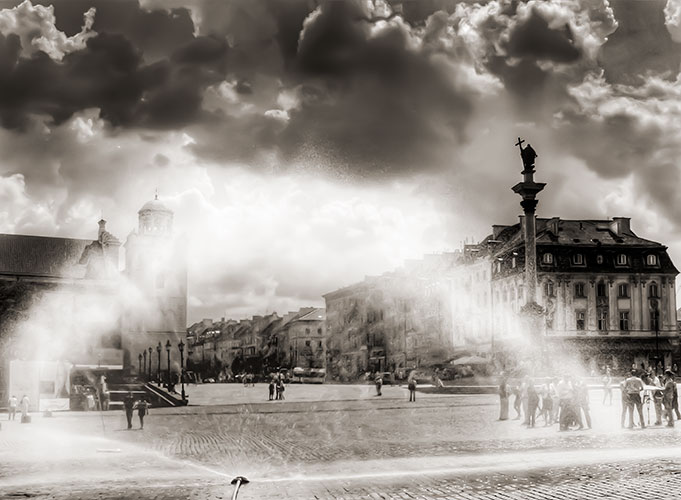 I much prefer this image to the previous conversion. The tighter crop gives more focus to the image and the sky is still strong but not unnatural. I really like the brightness of the spray  and how its arc becomes a divide in the image and pulls the eye down from the sky into the center.

Although the re-edit is better I would prefer to retake the picture (Sometimes I wish I had a time machine). If I could re-take the image i would get closer to the spray and look up to the statue and building on the right with the field of view being the two avenues that lead into the square.

Which image do you prefer and are there any images which, you would like to retake?