Tilt shift photography usually involves the use of a large format camera or a special lens like a lens baby. The term tilt shift comes from, being able to tilt the lens to a different angle to that of the focusing plane as well as shifting the lens as well. Using this technique means that you are able to photograph a scene minimizing the amount of perspective distortion as well as being able to focus on a diagonal plane across an image.

On Google there are many tutorials on how to make a tilt shift image and even CS6 now has a filter called tilt shift but for me there is a problem with both of them.

Using a tilt shift tutorial you create the image by using the gradient tool in quick mask mode to make a selection of the image which you then blur using the lens blur filter. You use the gradient tool from the top down and the bottom up. Once the blur has been created you use a hue and saturation and curves adjustment to create a more contrasted and saturated image.

In CS6 the tilt shift filter works similarly to the work flow of the tutorial I just mentioned. you use the filter to select the area you want to keep sharp.

With both of these processes there is a problem. Both of them don’t take into consideration the plains of focus. The processes work well on images that are shot straight with noting at an angle or with foreground interest.

As you can see in the two images above, the top of the building on the right is blurred because the process and filter shows does not know its position and can not think outside of the constraints of a gradient. the Image doesn’t look good because in reality we know it can’t be out of focus, the top and the bottom of the building are at the same distance from the camera. The same is with the tree in the foreground it is impossible for the bottom of the tree to be out of focus.

I believe to create an good faux tilt shift image you need to think a little bit about the image and where objects are and the distances between objects. 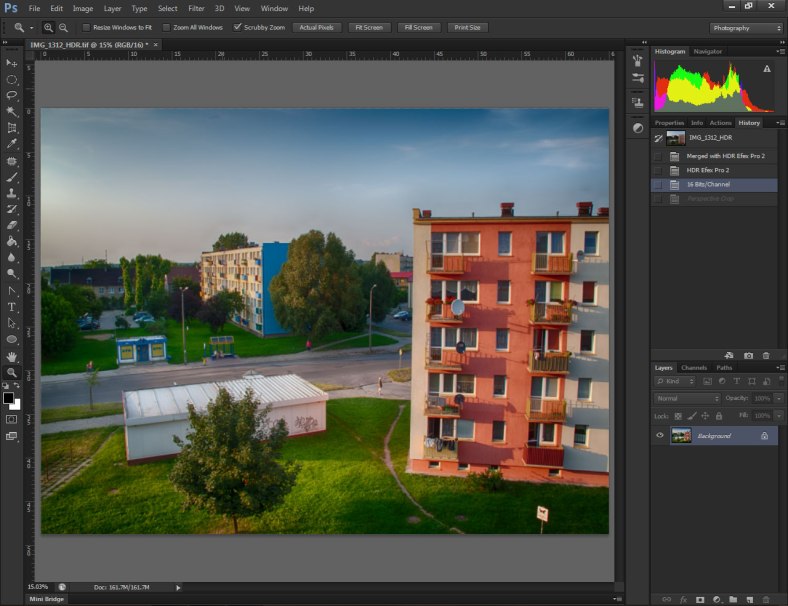 As you can see from the image there is a tree right at the front on third in as well as a building to the right about one third across. these two objects will cause issues when trying to make a tilt shift image as we have seen already.

Next using perspective crop tool I corrected some perspective distortion and cropped the image.

Now I had to think about what area I wanted to have in focus and what areas I wanted out of focus. I decided to keep the road with the lotto shop and white building with the corrugated roof in focus leaving the rest out of focus. To do this I used quick mask selection mode.

I duplicated my back ground layer and started first by painting roughly the area I wanted to select. Once a rough selection had been made I  then went in very close and cleaned up the selection this was needed for the bus stop and lamposts.

Once the selection had been made I saved it as a channel in case I would need it later ( I ended up not needing it but i find whenever i slect an area and it takes some time it is best to do this).

In then created a layer mask using the selection and created a lens blur.

I then duplicated the background layer again and moved it to the top of the layers. I selected Filter – Blur – Tilt shift.

In the filter window I selected the area I wanted to keep sharp and adjusted the amount of blur.

Using the layer mask I masked in the gradient to make the bluring feel more realistic.

Next I created a smart object of my layers, toned the image using Alien Skin exposure sharpened and reduced noise.

I then created a new layer and using the clone tool on this layer (selecting to sample all layers), I cleaned the roof of the white building in the foreground of leaves from the tree I wasn’t able to mask or did not blur well in the technique.

I created a levels adjustment layer to brighten the area of focus. I did this by dragging the highlights slider down and then masked the selection in with a large low opacity brush.

Finally I created a vignette using the elliptical selection tool.

As you can see from this technique everything within a specific area is sharp including the lampposts which previously would have been participially blurred and not too realistic. The foreground interest is blurred to the right amount taking into account its proximity to the focused area. The image also has the right amount of saturation and contrast. The central area that I kept sharp is bright as if it has been lit artificially and a spot light is lighting it.

Overall I like the image and the work flow has worked well but what do you think? Do you like the work flow or do you prefer using a different method? Let me know positive of negative using the comment box below.

One thought on “Editing; Tilt Shift”