The last couple of posts I have been looking at reducing noise in digital images. I have previously looked at the Reduce Noise Filter and also using Surface Blur to reduce noise.

Today’s technique is one I have used a few times and it has a nice byproduct.

The technique is to use multiple exposures stacked in a smart object. The theory behind this is, random noise is different from image to image even when taken at the same time with the same settings. In stacking the image and then using a filter Photoshop measures the value of all the pixels in an area from the highest to the lowest and then chooses the middle value thus eliminating  the noise that exists as a fluctuation in pixel value.

The beginning of this work flow is before you have taken a picture. What you must do is ,take a burst of exposures and the more the better. I used 27 exposures this time, if you were to use 3 I would say the outcome would not be as good 9 would be acceptable. You also need to shoot at a very high shutter speed or have the camera mounted on a tripod.  Although later we will align exposures you don’t want to have major shifts that may create artifacts. We are trying to reduce noise not make more work for ourselves.

The image I am using today was taken at the same time as the The Krakow Wool Market and Sukiennice that I used in the previous posts. I am not using them because I did not shoot several exposures. Instead I am starting with the city gate in Krakow.

The image was taken on New Years Eve morning, quite early as I took a tour of the city. It had been a snowy winter but the streets were clear. You can even see icicles hanging on the trees. The image is quite nice with the tones in the sky and the tower over the gate that has been restored giving a contrast in the new bricks and the old. 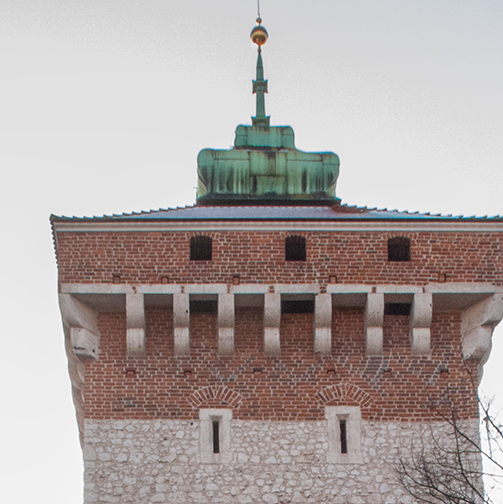 This is a zoomed in detail at about 175%. you can see some noise in the tower, espcially in the openings at the top as well as the sky. 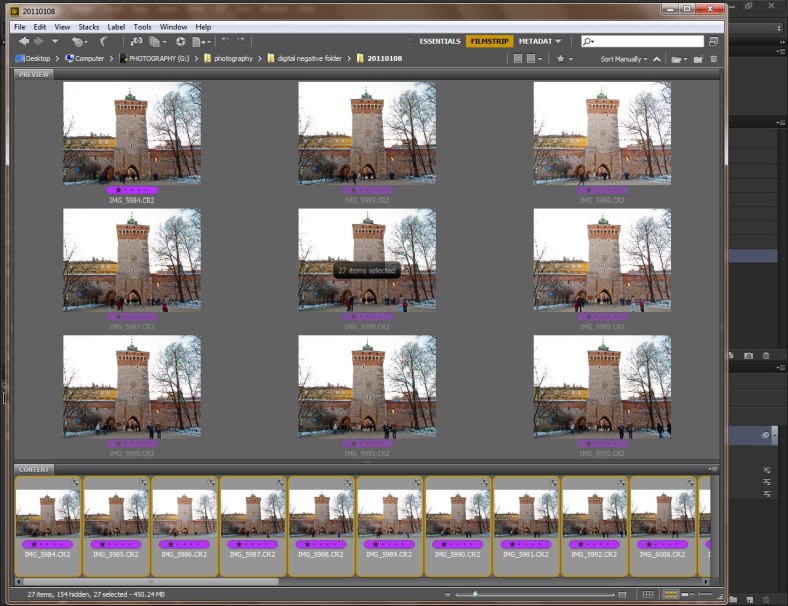 First we need to make sure all images are processed the same in Camera Raw. 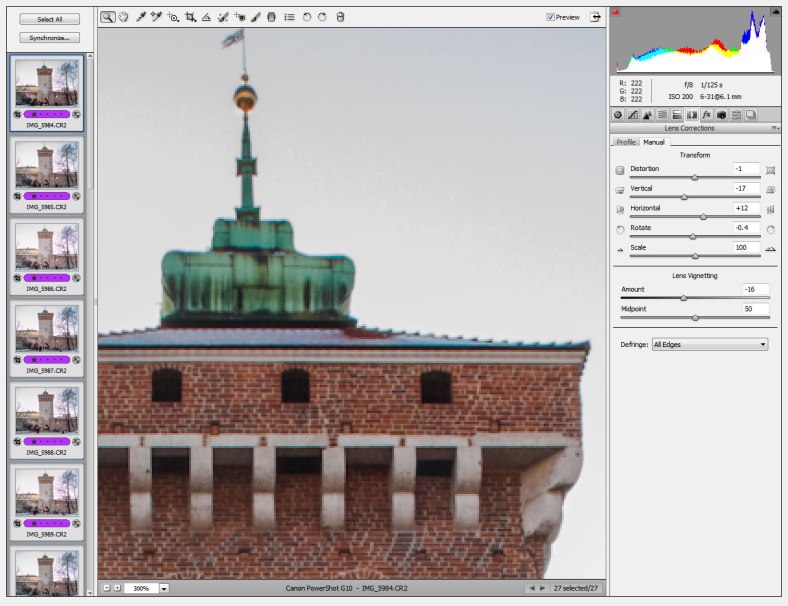 I loaded all the images into ACR processing one and then syncronised the adjustments. This could also be done by editing one image and then copying the development settings.

In Camera Raw I went Tools – Photoshop – Load files into Photoshop Layers. This will automate opening each raw file and placing them in separate layers in the same document. Once all the images are loaded I went Edit -Auto Align Layers, choosing the auto option but do not use the Lens correction options.

Once the images are aligned I converted the layers into a smart object. Now we are at the moment where the magic happens.
Selecting Layer – Smart Object – Stack Mode – Median. Median uses the information in the images to analyze the the value of pixels in an area choosing the middle frequency and eliminating the noise.

There is a by product of using this method and that is with a busy scene like the above, it will remove people.

By removing people it sometimes is not very accurate which means in this image I had to do some extra work.
I opened the the smart object by double clicking  the layer. This opens the compressed layer in a new window where you can edit the smart object. I don’t want to edit the image but duplicate two layers. I looked at the layers choosing two which, will cover up the distorted areas.

When I had found two suitable layers I duplicated them to the original document and closed my smart object editing window.

I then added layer masks to these new layers and masked in areas to cover up these distortions.

The first thing you will notice with the comparison is the perspective. The difference is due to the auto align step in the work flow. I shot these images hand held so there was a slight movement and at one point i must have raised my camera slightly, this contributed to a shift in perspective.
The difference in the sky especially is obvious. There is next to no noise in the edited image on the right compared the the original. The stone work also looks a bit softer in the edited version as well.

As you can see there are still people in the image but there is no distortion.

This technique with enough exposures can be used to remove people from a scene. Imagine being at the the Eiffel Tower and wanting an image in the day but it is full of people in the foreground. With enough exposures over a long enough amount of time you would be able to remove them. This is a great technique to keep in the bag not just for removing noise but also those pesky tourists.

This is the best noise reduction method but it needs some pre-planning when shooting. If you know the subject is going to be still and you are being forced to use a high ISO, you can shoot multiple exposures of then happy knowing that your image will contain less noise once processed. This would be especially good for night shots.

It is power hungry computing method and the length of editing will depend on how big your images are and how many you have.

I like the method but it does have its draw backs, but is another tool in the photographers belt.

If there is anything you would like me to write a post about or any question please head to “What is Aperture64″ and leave a comment there.

3 thoughts on “Turning Down the Noise; Stacked Images”