Welcome to another Friday and in many countries this is a public holiday. Here in Poland the schools are closed but it is not a public holiday. Tomorrow is quite an important day as it is the day that people take a basket to the church with some sausage, bread, egg salt, pepper and sugar lamb ( a lamb made out of sugar), to be blessed by the local priest then eaten on Easter Sunday at breakfast.

This year my parents are staying with us. One of the places I took them to while they have been here is Częstochowa. A place of pilgrimage and the location of the painting of the black madonna and child.

The churches at the monastery will allow you take pictures and I have photographed so much here but never got great images in the basilica.

I took three exposures and wasn’t sure is sure if it would work as a HDR, since i was already shooting under 1/60 sec at 400 ISO and was getting concerned about the amount of noise if it was converted to HDR.

I started by going into ACR (Adobe Camera Raw) and reduced the noise and then loaded the images into HDR Efex.

Once loaded into HDR Efex I could see that there weren’t any major problems except the perspective and people.
People are one of things you either need to find a way to incorporate into your image, work around or think about removing.

I raised the depth of the image to strong so that the reflections would pop out of the marble on the walls, the detail was set to accelerated and drama to dingy as when i rose these two the image went crazy and a little bit over the top. The general exposure was raised slightly just to make sure the frescoes were clear. I also raised the midtone contrast via structure. 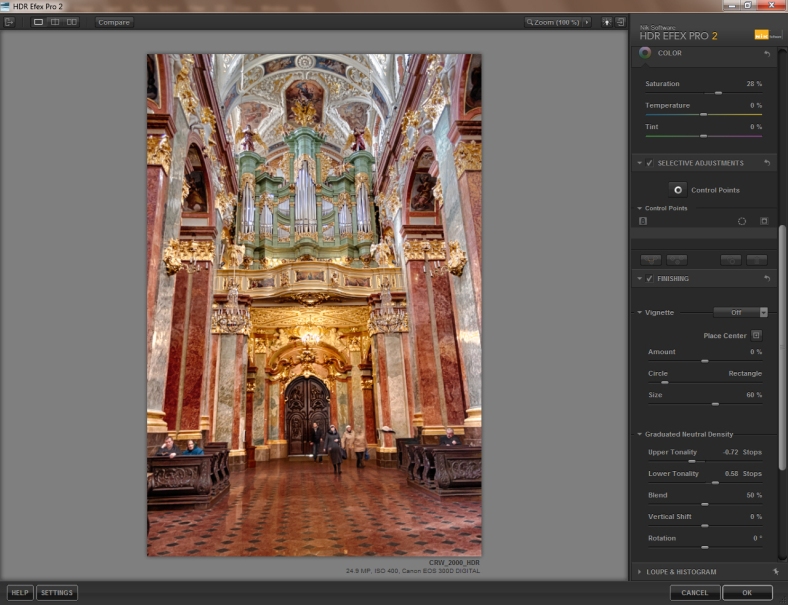 The saturation was raised to bring out more of the colours. Finally i used the gradient to lighten the top portion of the image and darken the foreground. I did this to balance the light of the image.

Now the image is in Photoshop I need to correct the perspective. I tired many different methods but in the end the most successful was to rotate the image and then use Image- Transform and Perspective to fix the image. 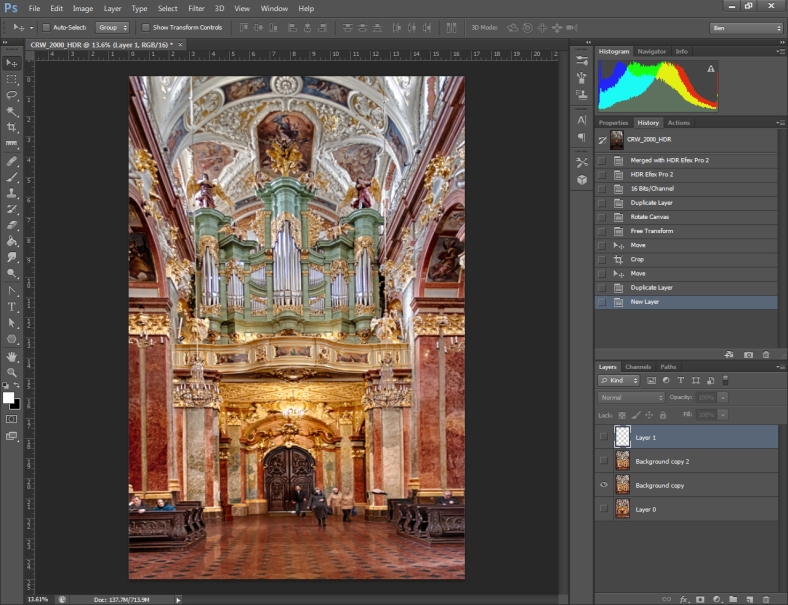 In correcting the perspective you lose a little bit of the pillars and pews at the side. 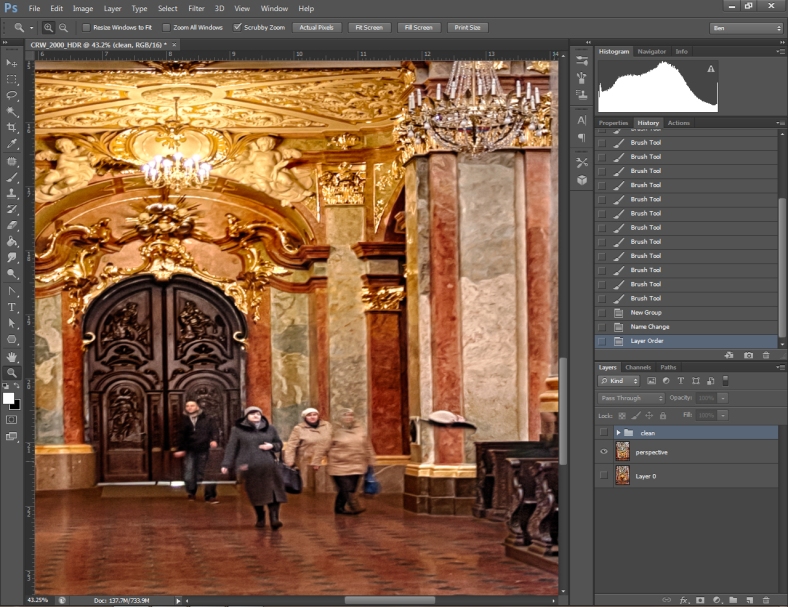 There are three groups of people in this image, group one are coming and going from church  The HDR conversion helped blend some into walls but I will need to do the rest. I started with the man at the back.

I removed the man by using the existing door, copying it and flipping it. I then blended it in. Next I used the Patch tool with content aware to remove his feet and he was gone.

The ladies needed a little bit more work. I used the patch tool and content aware to replace them with the walls. The hard bit was knowing how to get the lower part of the wall reconstructed as their legs go through it. Once again I used the wall from the other side of the room and flipped it and blended it in and then smoothed everything with the clone tool.

Of course there were people sat in the pews and using mainly the clone tool I removed them and reconstructed the wall and pews. 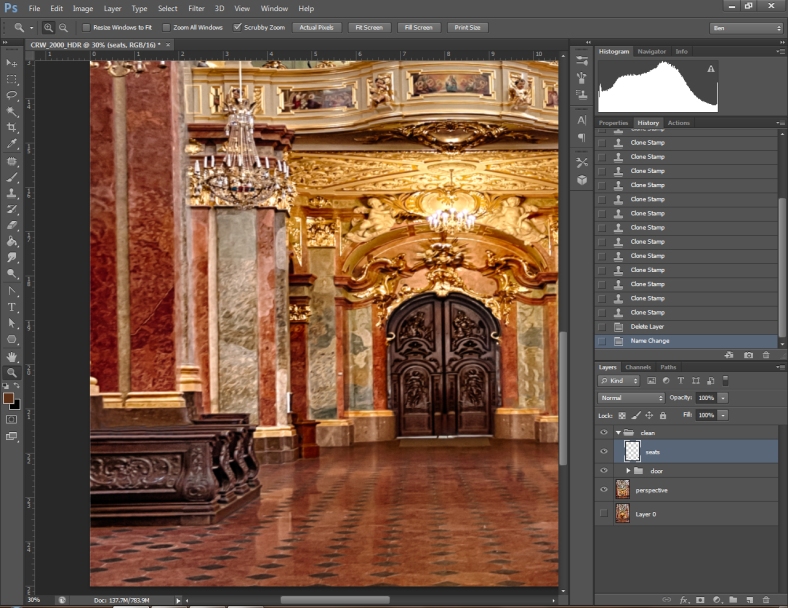 When ever removing something from an image the task is to make it look natural. The easiest way to do this is to use what is in the scene and slowly build it up.

Next I took the scene into Color Efex to tone the image.

In Color Efex i wanted to enhance what i already had, making the colours pop while not leaving them too saturated and adding contrast without too much garishness.

There were some araes where i wanted to make a few adjustments. First darken the sides and the bottom a little but also lightening the the area near the door and lowering the saturation of the yellow light.

The Final Image for me works well. The church looks as rich as i remember it did in the week, with the strong reds and golds as well as the way the light reflected off everything. It does seem like there are two images at work one which is on the ground the red and gold but as you go up there is a second with green, gold and white that is much lighter. The removal of the people for me has made the image stronger as there is no distraction.

There is still some distortion in the image and it feels as if  it is not straight yet it is. the straightness of the image is a discussion point in my apartment at the moment

Over to you, let me me know what you think about this image.

Was I right too removed the people from the image?
Should I have toned down the contrast?
Can you answer the question of the day, is the picture straight?

All comments are welcomed in the comment box below.