Welcome back to Friday and congratulations for getting to the end of the week. This week was really intense for me but I have had so much fun and glad to having some free time over the next three days.

This week on Editing Friday I am editing an image from the botanical gardens. In the gardens they have a brilliant series of statutes of Peter Pan (or a Pan like boy) in the wooded area of the gardens. 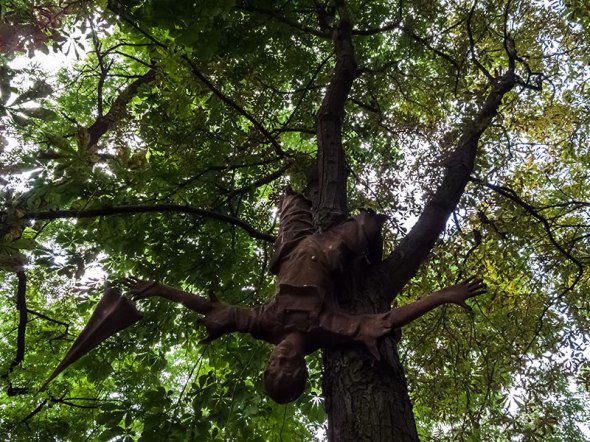 I stated in Camera Raw using a basic edit t balance the image.

I duplicated the background layer and made a levels adjustment (Image-adjustment-levels) and dragged the midtone slider to the right to make the image darker.

I positioned the center to roughly where the direction of the light was coming from.

The effect will depend on the image. In most cases the streaks are not that long. To make the streaks longer, reapply the filter a few times. You can do this by using the shortcut Ctrl F.

Once I was happy with the length, I changed the images blending mode to screen and applied auto levels to increase the contrast of the streaks.

I duplicated the image twice and then merged the layers then adding dust and scratches with a radius 1. In adding the dust and scratches the  filter adds distortion to the rays, making them more realistic.
Finally I added a hue and saturation layer, shifting the hues to warm tones (hue +75).

Now I toned the main image in Colour Efex using Indian summer as the basis of the toning, creating a really warm image changing the hues in the leaves. ~
I reduced the noise of the image and sharpened the overall image. I was not happy with the slight blur on the statue. It had been blurred through the noise reduction. I duplicated the image layer used the high pass filter to sharpen the image. I selectively sharpened the statue using a layer mask.

I made some local tonal adjustments using a dodge and burn layer (new layer filled with 50% grey with a blending of overlay) and added a soft vignette. I also made a contrast adjustment to the statue. 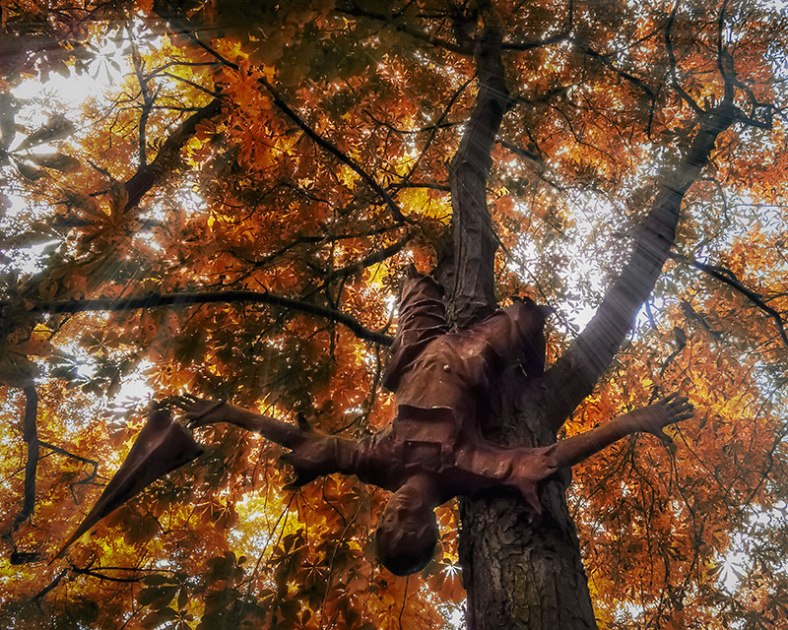 The final image I cropped, removing the right side of the image to tighten the image. With the crop the statue takes center stage, being compositionally slightly off center with the umbrella and the out sticking fork of a branch being on parallel diagonals.

The image has been greatly manipulated with the leaves being a very different colour to the original as well as the addition of the light streaks. For me both of them enhance the image. The colour of the statue didn’t work in my opinion with the green leaves and the warmer tone of the leaves is more complimentary. The image could work with the light streaks, though with them they work to bring the eye down from the top to the statue.

What do you think of the work flow? Do you think the image has been overly manipulated? Do you like the idea of the light streaks? Or any other thoughts, let me know using the comment box below.