I cant believe how fast time is moving now it is sunny and warm outside. I was looking in the register of some of my classes and realised I only have between 4-8 weeks left until the classes end. It really does feel like I started the year a few months back. But on the flip side when the classes end I have more time to create images.

This weeks edit comes from an image I shot at the weekend. My wife and I headed to a local park that neither of us had visited before. Personally I was attracted to this place because there is a labyrinth in the middle, though it wasn’t much of a labyrinth.
On out walk around the park there were several squirrels running around. They were  quite easy to photograph as they seems to be used to people walking around but they wouldn’t come near you. This was the time to use a longer lens to get up close and personal.

For this weeks  image I was under a canopy of trees, and I was thinking more about capturing the shot than my exposure settings as “Secret Squirrel” was not a mission not to stay still. This had left me with quite a dark image. Normally I would shake my head and not pay to much attention to these images when they are downloaded. This time because I knew the image was going to be great.

What i needed to do was expand the shadow detail into the midtones to bring out the information in the trees and squirrel without shifting the highlights too much. The image still looks quite dark, this is because I am not going to try and bring everything to the midtones, I am attempting to keep the feel of being under the canopy. I will bring the Squirrel out more later.

Next I expanded the contrast in the midtones by using clarify. I did this to create details in the midtones by forcing the contrast there. I also made adjustments to the saturation and Vibrance to boost the colours in the image. One of the side effects of this is that the breast of the squirrel is now slightly yellow. This I will need to fix this. 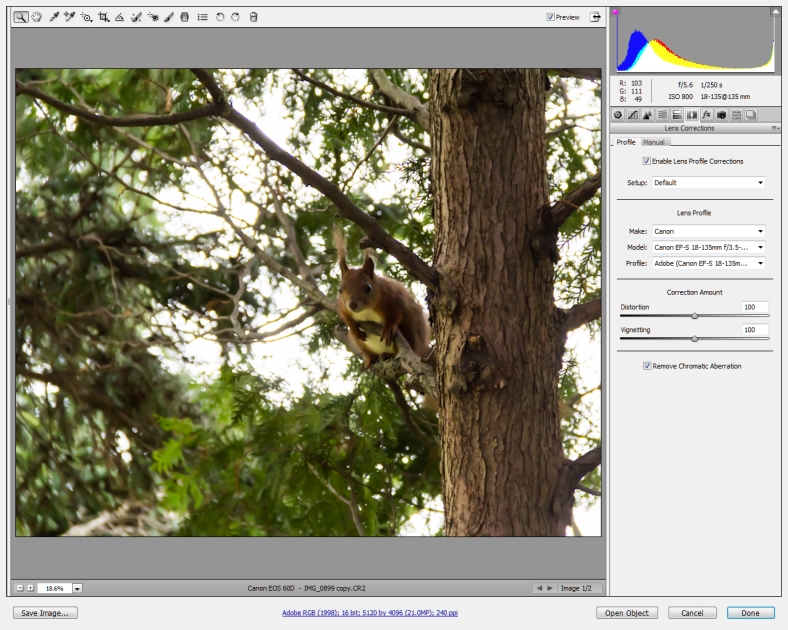 Made some quick adjustments for noise reduction and capture sharpening  The image was shot at 800 ISO so there was a nice bit of noise but nothing too bad. I also used lens correction to reduce the distortion caused by the lens.

I added a vignette to the image to darken the corners and bring the focus in on the Squirrel.
It can be said that the squirrel was already the focus of the image and that is right, though in adding the vignette it  keeps the atmosphere of the wood as well as keeping the squirrel seeming lit.

I had to make three local adjustments to the squirrel. The first was just general toning to lighten and define the subject. 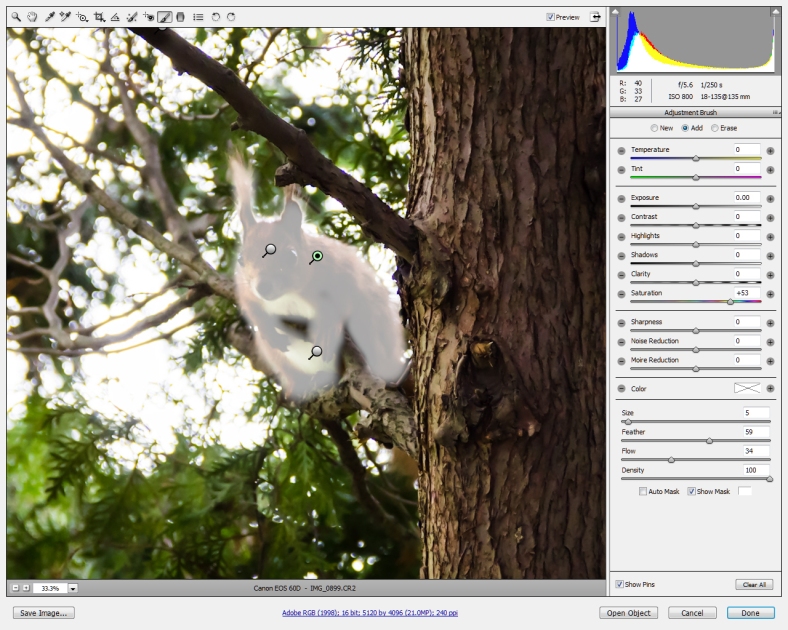 The second adjustment was to the saturation of the squirrel to really bring out the red and orange in its fur.

The last adjustment was to cool down the breast of the squirrel to reduce the yellow.

In Camera Raw my last adjustments was to the contrast of the image.

In Photoshop I first toned the image with a Kodachrone 64 esq colours using Exposure 4 this give nice deep blacks and saturated colours.

My final adjustment was localized sharpening. I didn’t want to sharpen the whole image just the squirrel to keep it popping out. I did this using the High Pass Method

I am really happy with the way the image came out. It does look like it did in the park. I am mostly happy with the pose of the squirrel and how it looks like he is tensed ready to jump.  The vignette is possibly too strong but it does work bringing in the eye to the subject of the image. The toning I feel is natural with the different hues of green in the surrounding trees as well as that right reddish brown of the tree itself.

What do you think of the image? Does the vignette work for you? What would you have done differently? or anything else, let me know using the comment box below.

3 thoughts on “Editing Friday; Not So Secret Squirrel”