Photoshoppers like to Photoshop, and I would say most photoshoppers have photographic skill. Sometimes photoshoppers create images for fun that have relevance to current events in the world for fun, other times the Governments ask photoshoppers to create images to help enhance their message and a further group of photoshoppers are photographers and use their skill to create a better image (even if it creates, an unreal narrative with ethical and moral questions that can be raised). Examples of all three can easily be found on the internet; Hurricane Sandy coming down on the Statue of Liberty, North Korean beach invasion, Soldier Pointing his gun at a man running with an injured child.

All of these examples are of fake or hoax images that gain ground and enter the mainstream consciousness via the 24hr media machine which is fed from social media. Images are posted on Twitter and then retweeted and retweeted to the point where hundreds and thousands of people see the images and an apparent new trend has been born and the media takes hold of it and shares it to the even wider world. Usually the condemnation of the image being a fake rises through the same process. A group of researchers from the University of the Maryland, IBM Research labs and the Indraprastha Institute of Information Technology are trying to find a way to automatically detect fake images and to prevent their spread or quickly alert that an image is a fake.

The overall goal of the research is to help journalists to weed out the fakes before they enter the greater mainstream consciousness. The research has shown that 86% of images that are fakes or hoaxes are spread via retweets, but more interesting is that there is a small influential group of tweeters (0.3%) that are responsible directly/indirectly for 90% of all retweets of fake images. The research has enabled the researchers to develop an algorithm that can detect fake images with a 97% certainty without manual checks.

I have no problem with people creating Photoshop images that are current with what is going on in the world. As with all images they can illustrate a story or an event. Though I also think these images need to be captioned as a composite image. Governments will fake images but as always the truth will out, as photoshoppers over the world dissect the images.
The truth is images have been faked before Photoshop existed and used by governments to fake an event and by people to create fantasy worlds. In the end these images are recognised and are named and shamed. The bigger problem is the constant sharing and retweeting of images that are faked or hoaxes mostly with a passive click. 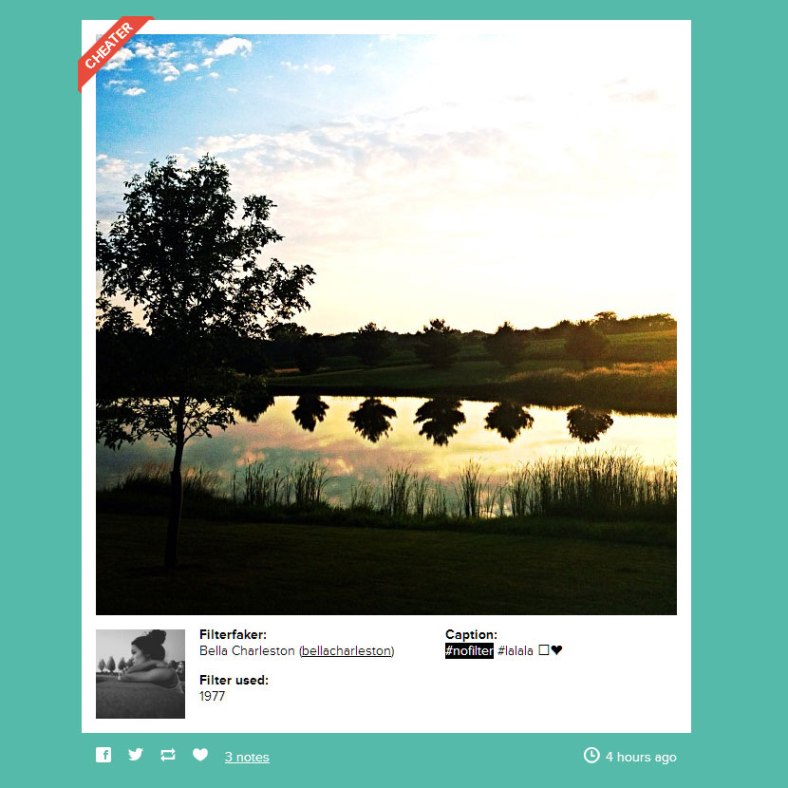 There is a trend on Instagram using a hash tag of course, #nofilter. This tag is used to promote your image by saying that it does not have a filter and the image is as shot. Possibly this tag was thought up as to show that a person’s image doesn’t need what are now fad filters and the image stands out on its own merit. Of course with any hash tag that becomes a trend or popular, people jump on the bandwagon for more exposure.

A Tumblr blog “filter fakers” are not happy with the badge of honour, #nofilter, being used falsely and are outing images that are using the tag falsely. The blog is trying to create honesty in the world of hash tags and the internet.

In looking at the images that are labelled; Liar, faked, phony and fraud. It can be questioned why people are using the tag when it is obvious that their image has been processed with a filter. Is it that the people don’t understand the point of the hash tag or what it truly means.

In some cases I do question if an Instagram filter has been used, as not everyone uses Instagram to share camera phone images. An image that is; slightly better exposed, with bolder colours, more contrast and clarity out of camera than a camera phone image.

Of course this is a petty blog bringing up a trivial matter on Instagram. It does though meet a current conversation in the photographic community of when a photo becomes a photoshopped image, with winners of competitions being called out as cheaters or images as fakes because of the image processing.

In the end does it matter so much if a filter is used or has been edited in Photoshop.

The biggest news for me last week was the Announcement of the Canon 70D. This news as like a firework that didn’t quite bang. The 70D is a DLSR for enthusiasts and an upgrade for the 60D, with a 20.2MP dual pixel sensor with a 3 inch LCD touch screen interface and Wi-Fi image sharing for remote camera control.

This camera sounded quite exciting when I first heard of the dual pixel sensor. The sensor splits each pixel into two photodiodes for on chip phase detection focusing, promising faster autofocus. I am all for speed, but was disappointed when it saw that this was only in Live View shooting and Movie Mode. For those who don’t use live view then this new faster autofocus is not functional and you can use a 19 point AF module that is taken from the 7D.

Apart from a new sensor, Wi-Fi and autofocus in live view there is not much difference from its predecessor the 60D.

I like the fact that the camera inherits the 7D’s 19 point autofocus system and Wi-Fi. Wi-Fi is something I would use as it could be useful to set the camera and then shoot away to get some nice candid work or use it as a remote. Also sharing images directly to a phone or tablet in some instances means you can publish your images quicker online.

The touch screen interface for still images is not that useful in my opinion but for film I can see the advantages.

What Don’t I Care About?

There are the fun filters in this camera that exist on the 60D and the Rebel range (100’sD models) are great but for enthusiasts I am not sure how much they would be used. The raw editing on the fly is good but not new so I am more blasé about it with this model. A 20MP sensor does sound nice but really how many pixels do you realistically need.  A 20MP sensor uncropped would give a 12×18 inch print at 300ppi about 1/2 and inch more on each side than the 60D’s Sensor.[i]

Really the big bang was the new Dual Sensor which in this first model is interesting but not actually for photographers. Really at this moment the phase detection auto focus is an innovation in digital photography it is not yet really for the still images. The camera would be a reasonable upgrade form the rebel series and if you have had the 60D for several years, It could also be a good camera for someone who is getting interested in photography.  Yet if you have bought a mid-range camera in the last 12 months I wouldn’t upgrade straight away but see how this new tech will be used in the coming year or so.