It has been a while since I have done an Editing Friday and I thought it was about time that I set the ball rolling again.

This morning I wrote in a post that Polariser Filters were one of the few filters whose effect cannot be replicated digitally. This is a half-truth, the effect of reducing reflections cannot be reproduced but the boost colour saturation can .

A Polariser works by filtering out reflective light and in doing so creating an image with defuse light and more saturated colours. I am not going to try and replicate the effect of the filter but create an image that has like tones of a polarised image. This will be great for photographers who don’t use a DSLR and can’t use filters on their camera or for people who want  to boost colours in an image.

I started in Photoshop with an image which I had applied a basic edit in Adobe Camera Raw.

First I duplicated the background layer and set the blending mode to difference. This will turn the whole image black. Then Image –Adjustments – Shadow and Highlights, setting the shadows to 0% and the highlights to 100%

Secondly I duplicated a new background layer and add a layer mask (reveal all) and go Image – Apply Image.  I used the settings

What this does is take the information from the above layer and place it into the layer mask.

Underneath the layer I just created, I placed a Brightness and contrast adjustment layer and set the Brightness -25 and Contrast +50.
Next I selected the layer mask in the top layer and apply auto levels by going Image – Adjustments –Levels – Auto and then set the blending mode to multiply. 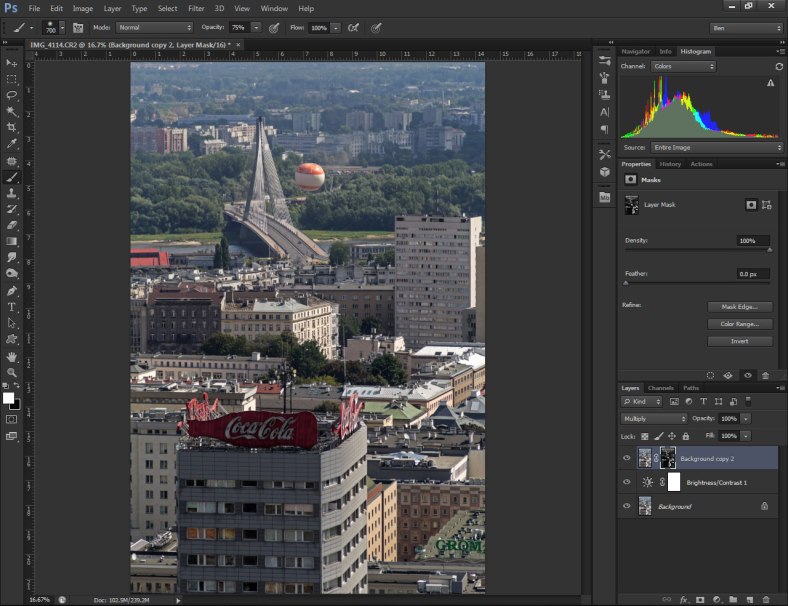 What this has done is to selectively darken highlight areas and add contrast to simulate a more defused light source. In this image the effect has affected the right face of the buildings and the hot air balloon.

Now it is time to boost the saturation.

The colours are looking good and this is the effect of the workflow. Now I just need to make adjustments to the brightness and the contrast of the image. I will make all of these adjustments underneath the saturation and vibrance layers so as not to have an effect on the saturation.

I took the bottom three layers that I edited at the beginning and created a smart object. I reduced noise and sharpened the image. I then made few more fine adjustments mainly to the distant background.

I think the effect works well, there is definitely more punch in the images colour and the landscape is lit more evenly. The distant background is not great but the source was not great as well with the have, if I had used filter on the lens then this would have been reduced.

What do you think of the effect? Is it something that you would use? Or do you prefer using a traditional filter on your lens?
Let me know in the comments box below.