It is Friday and time for some editing. I am still recovering from the lurgy and hopefully by going back in time I can circumvent ever catching it in the first place.

This week I am going to go back to 19th century France, to one of the first photographic processes (depending if you a Talbot or Daguerre fan). The Daguerreotype was a direct positive image technique. One of the Daguerreotypes major disadvantages was that images could not be mass produced like with the Talbot process.

For my editing process there are three areas I need to be mindful of.  Daguerreotypes had long exposure times, meaning that objects in your image that move will need to be blurred. Daguerreotype types were printed on metal so I will need to replicate this, the easiest way to do this is to use a metal texture and print on glossy paper.  In replicating the process and having an image that looks like a Daguerreotype from the past I will also need to stain the side of the print. I can achieve this with brushes 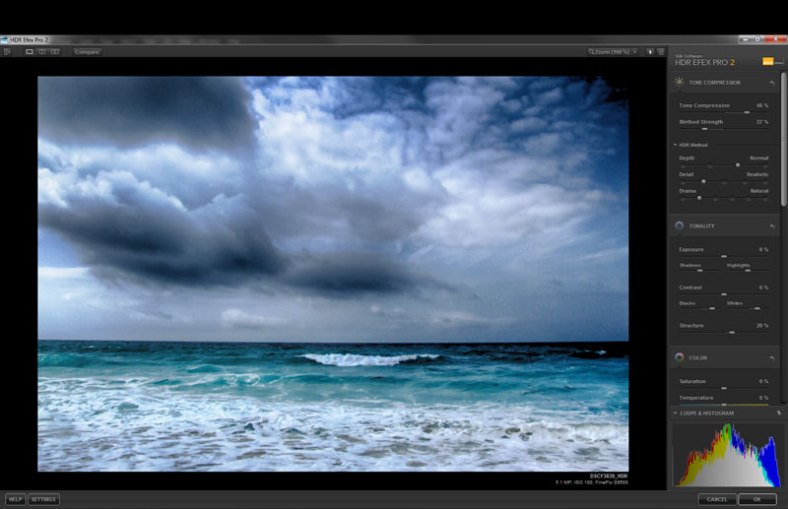 I am using an old image I took in, St. Ives in Cornwall, of the surf crashing on the beach. I will need to do several blurs on this image because the sea in the background would have been moving slower than the foreground.

I then created a curves adjustment to add contrast and clipping the highlights and the blacks. 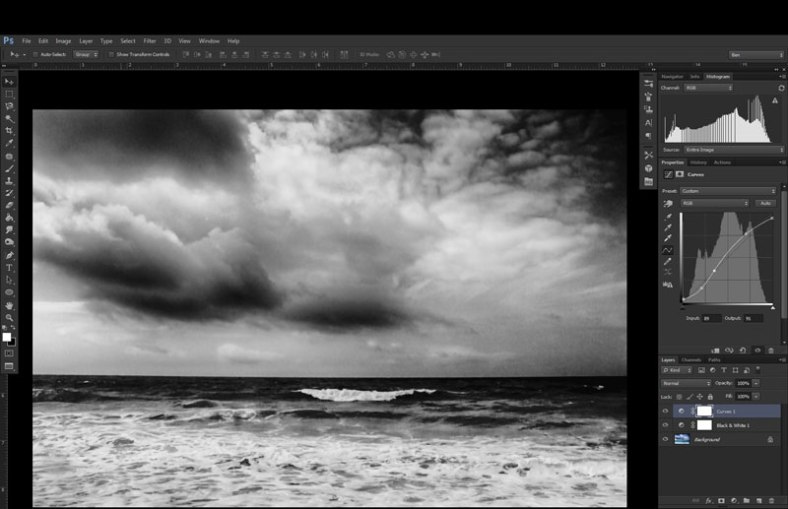 I next selected different areas of the sea foreground using quick mask selection and a large brush. I then copied the selections onto new layers and used the ruler to measure the angle of the movement and then used the Motion Blur Filter. The filter would take the reading of the ruler to set the angle I then set the blur by eye with settings between 43-72 pixels. 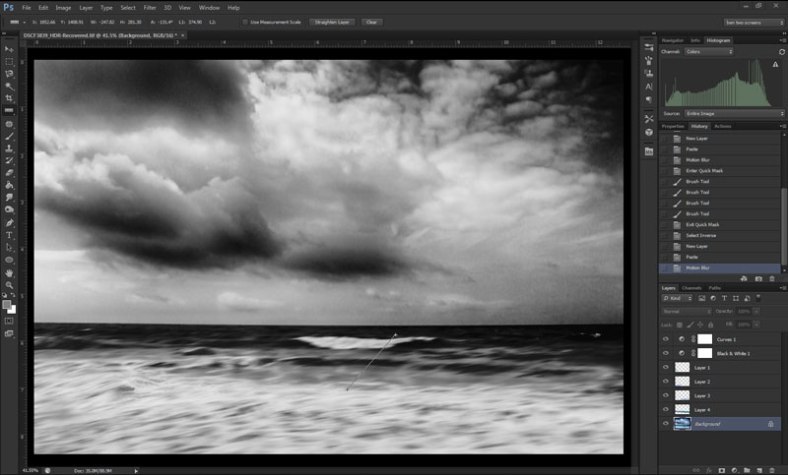 I then selected the sky and used a small radial blur to create slight movement in the sky.

Now I added the steel texture to the image placing it on top of all the layers.  I scaled the texture to fit and set the blending to overlay.

The next part was burning to the edges of the print. A characteristic of a Daguerreotype is uneven burning and orange and blue chemical staining. I did all of this on three layers using a dry media brush with a low opacity. I filled each layer with 50% grey each with the blending set to overlay; on the first layer I used black for the burning applying the brush strokes unevenly to the image. The second layer I used a light orange colour to add a few splodges of colour using different brush sizes and the same on the third layer with a light blue.

I added a border using a selection of grunge brushes at a low opacity, switching brushes and sizes to paint in the edges.

Finally I rounded the corners of the image by using the rounded rectangular tool and using it as a template to create a selection. I grouped all my layers and used the selection to create a layer mask.

I am quite happy with the final image. It has a nice blur effect of a longer exposed image with the sky seeming to be moving to the distance and the surf slightly milky. I think the aging works especially with the chips and worn areas from the texture layer, as Daguerreotypes had a tendency of being easily damaged and this adds a nice effect as well as the aging from the staining on the edges.

Let me know what you think using the comment box below.