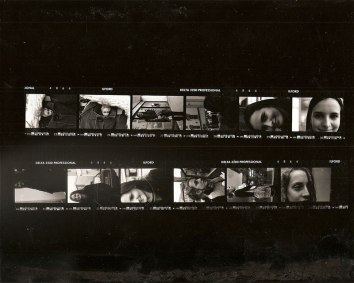 I was a big advocate of film when I was studying photography. Why? Because at the time digital was just picking up and the difference in quality was not that big ( when compared to 35mm film) until a year or so after I graduated.  I saw that there was a reason for shooting digital and I moved over but still miss the days of film. What do I miss? Well it is more an emotional pull to being in the darkroom and developing film, not knowing how the shots will come out or even if they will. I miss the smell of chemicals on my hands and being blinded by the light of day as I leave the darkroom. I did scan my negatives yet this was not as enjoyable. Do I miss my manual camera and lenses? Yes, but I also used a modern film SLR that had autofocus, quick motor drive and was very responsive, just like my digital camera. This is why I am not pulled back to my old cameras as much as to film itself because the film cameras at the beginning of the digital age were not too dissimilar to that of digital cameras of now, except of course without the sensor.

Nikons new DF camera is really a FM2 (1982 nikon film SLR) styled body with a D4 sensor inside. The camera has been hyped by Nikon in their pure photography videos, getting us all nostalgic about how we used to shot and the mechanical feel of chrome under our fingers. Specs wise it sounds pretty decent with a 16 megapixel full frame CMOS sensor, 5.5 frames a second and a 39 point AF system. It has a 3.2 inch screen with live view and is compatible with old Nikon f mount lenses. Also no video, which in my opinion I don’t care about, I don’t shoot video.
How much will this puppy cost? $2750 or £2750 ($4400) even with 20% VAT this is still overly expensive in the UK. When you consider that the D800 that sports a 36MP full frame sensor and a 51 Point autofocus system and can shoot up to for 6 frames a second is only $2796 or £1819 and it shoots video.

This is where I am lost and I think Nikon is taking people for a ride. The camera is the same size and a little lighter than the D800, it is less powerful yet it is in a similar price range. This camera could easily be sold cheaper in line with other cameras in its range yet it is not, because retro is in vogue and has been for a while. To emphasise this more Nikon have said from a philosophical position they never wanted video to be built into the camera. Ok, but why not go with the philosophy of “Pure Photography” and not include a 3.2 inch screen or live view. Have it so you must select colour or black and white before you shoot and not let you  see the photos until you download them from the card. If you are following the philosophy that this is a retro digital camera then I would buy into it, but they didn’t.  Even more you don’t need to use the mechanical dials at the top as all settings can be programed from the menu so these become just more cosmetic features. Nikon fan boys will cry, “yes but it is backwards compatible with old lenses”. I would ask who still has a huge collection of film lenses, as most people sold their film gear in the switch to digital at some point.

The camera is for a niche market. Those who want a retro looking camera because it is fashionable and looks cool, and those small group of photographers that still have their old lenses. In the end if I was to suggest a camera I wouldn’t suggest the DF but would say spend a little bit more to Americans or save a nearly £100 to the British and get the D800. Photography has always been a forward moving medium and this is a step back. The DF is simply retro for the sake of being retro.

What Do you think, is it retro for the sake of being Retro? Is it a camera you would go out and buy? Do you think this is the future of digital cameras? Let me know by using the comment box below.

6 thoughts on “Nikon DF, Retro For The Sake Of Being Retro”