On the way to nowhere in particular  there was a ramshackle  wooden cottage. It was home to the daughter of a wizard. However, she did not look like her father in any way and nor did she share his gift for magic. Not that this bothered her too much. She was a kind and even-tempered woman who tended her allotment with care and dedication and spun her sheep’s wool to make warm sweaters to protect her husband and young son from the cold. Even though there were no shops bursting with toys in those days, her little boy was never at a loss as to what to do. When the weather was good, he played in the allotment alongside his mother or amused himself in the woods alongside his father. On stormy autumnal days and bitterly cold winter days he played inside with toys his parents had made for him themselves. That was normal back then: fathers and mothers made the toys for their children. 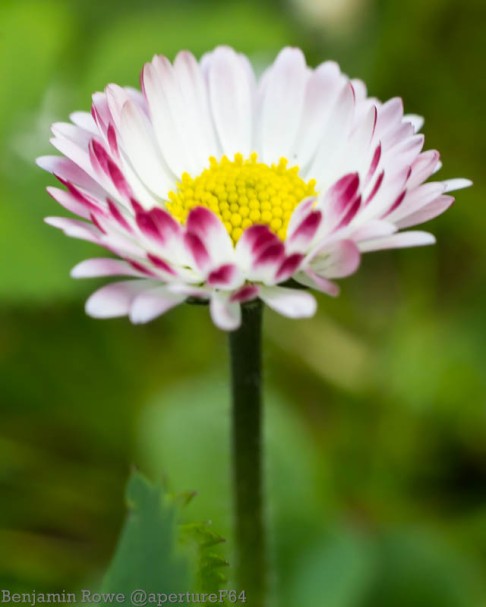 One day the rain was clattering on the windowpanes while mother and son were busy making little flowers. Around a small yellow heart they stuck many little straight white petals. The mother cut out the narrow petals using a small knife, but when she had almost finished, the knife slipped and she cut her finger. A few drops of blood coloured the tips of the petals red. She threw away the spoilt flowers and began again. Later that day the little boy picked them out of the bin and kept them in a small box under his bed.

Early on it became clear that the boy had inherited his grandfather’s supernatural gifts and grew up to be a good wizard. Many years later, after his mother had died, he found the small box of petals his mother had thrown away after she had cut herself. He took them with him outside and in memory of his dear mother he blew life back into the white flowers with the petals tinged red. These flowers would cheer people up and be fun for children .. just like the sun does. Hence why he named it the  ‘day’s eye’ (Old English). The white flowers felt so at home that they flourished, spreading far and wide.

How do we know that our daisies are the offspring of those magic flowers? If you look at them carefully in the early morning when the sun is not yet shining and the flowers are still closed, you will notice that the tips of the petals are tinged blood red. If the sun is already shining and the flowers have opened, then examine the underside of the petals and you will also realize that it is a descendant of the little boy’s flower.

If you wish to get notifications when I post on my blog, you can follow me on Twitter@apertureF64, on Facebook.com/aperturesixtyfour or alternatively be emailed by subscribing below.
All images are the Copyright of Benjamin Rowe , ALL RIGHTS Reserved unless credited to another photographer.
For more information please read my Copyright Statement