The After and Before forum is organised by Stacy Fischer, it is a place where amateurs as well as seasoned photographers explain the wow and how about their photo and editing decision.You can read more here about how to take part.

This week the After and Before forum is 6 months old. To celebrate over the last couple of weeks we had a poll on Stacy’s blog for you to choose one image we will all edit. The most voted for image was Karen’s landscape taken along the Arno River in Florence.
It was really strange to edit someone else’s photograph and it is something that I don’t do very often. The only time I have another person’s image on my screen is when I am creating a composite and it is a stock image or a friend wants me to make picture look “amazing”. 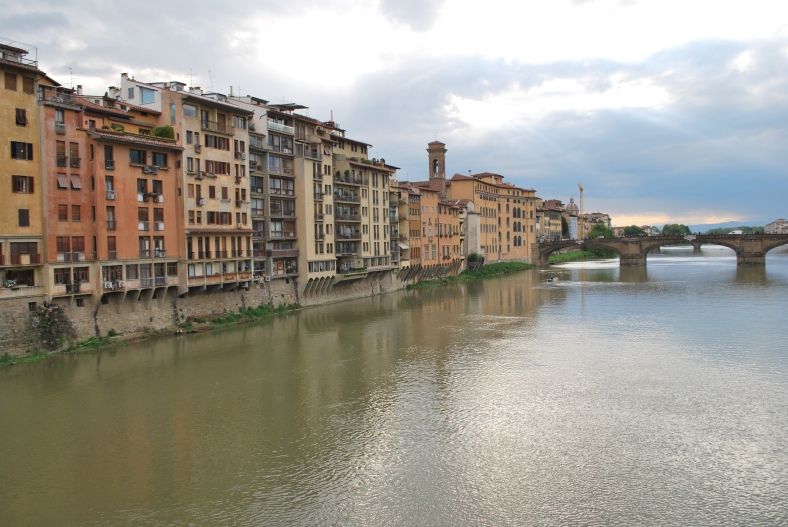 There were some areas that I felt needed to be worked on; first was the sky and second was the strange colour cast in the water. The original file was also a jpeg, a departure from my usual starting point.

When I had finished with the HDR toning I grouped the layers, duplicated and merged the duplicated group. I chose the Magic Wand Selection tool and selected the highlight area in the sky. With the selection active I went Edit-Fill and then chose content aware. The fill wasn’t perfect and I used the clone tool to blend the edges.

Selecting all the layers I turned them into a smart object. I applied ACR as a smart filter to adjust the exposure, black and white point, clarity and vibrance.

The sky was still looking a bit strange, I created a new layer and used for some more cloning of the sky.

I now wanted to concentrate on colour. In the shadow of the building the water had a green/yellow colour cast. I added a hue and saturation adjustment layer, first adjusting the hue to correct the cast and then the saturation and lightness to match the rest of the picture. I selectively applied the adjustment using the layer mask.

I wanted a stronger reflection in the water. To create this I duplicated my background layer, rasterized and flipped it. Using transform tools I placed the layer and lowered the opacity until it looked natural. I then used a layer mask to blend in the new reflection. To be certain the colours matched I added a hue and saturation layer clipped to the reflection and adjusted the yellow tones.

I added a warm photo filter adjustment layer and applied it selectively to the sky and areas of the river.

With the colours now set I moved on to lighting.
I filled a new layer with black and set the blending to multiply.  After creating a layer mask, I used a large brush set to black to reveal the areas of the building and bridge. I reduced the opacity of the layer, duplicated it and set the blending of the duplicated layer to overlay.

In my head I split the picture into three areas; sky, buildings and river and used curve adjustment layers selectively to adjust the contrast. 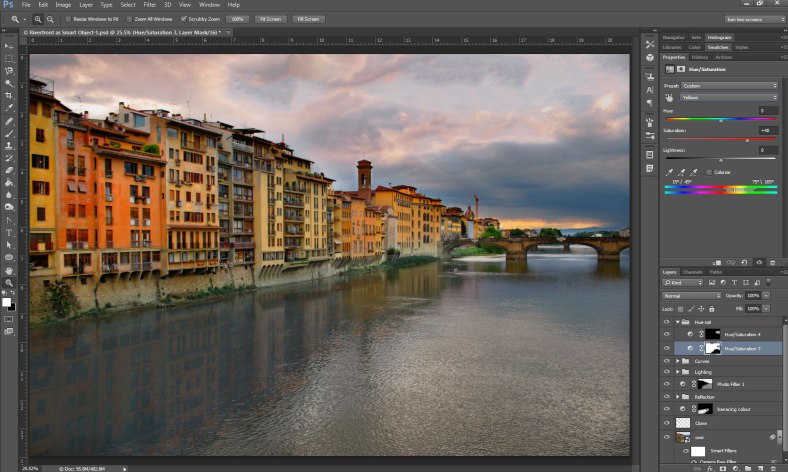 The final tweaking was to control some colours that had gone crazy like the blue in the sky, which was too strong and the yellow in the buildings that was not strong enough. I made these adjustments with two hue and saturation layers.

When I had finished editing I saved the file and didn’t look at it for a few days. At first I wasn’t pleased with what I had done; I think this was because I had spent a long time editing  the picture. Coming back with fresh eyes the final image was strong and the colours were great. I did tweak some settings (these are the ones you see in the screen shots) to tone down some stronger adjustments.

I would really like to know what you think about the image, let me know in the comment box below.

Also please head over to Stacy’s blog to see the other participant’s version of the image.

30 thoughts on “After and Before Forum; 6 Month Anniversary Special”