The After and Before forum is organised by Stacy Fischer, it is a place where amateurs as well as seasoned photographers explain the wow and how about their photo and editing decision.
You can read more here about how to take part.

When I first got Stacy’s image I was a bit stumped at first about what I would do. I did however know I wanted to cover up the turned up earth in the lawn.

I started with some basic adjustments in camera raw. I mostly opened up the shadows and preserved the highlights. I also spent some time correcting the perspective as well.

I opened the image from Camera Raw as a smart object. I created a new layer above the original and using the lasso tool made a quick selection of the turned up earth on the left side of the lawn. I used the patch tool to replace this area. After I had patched it, I cloned around the edges to clean up the replacement grass.
On the right side I used the lasso tool again but this time to select what grass there was and pasted the grass onto anew layer. I then duplicated and moved the grass to cover the turned up area. I repeated this several times until the upturned earth was covered. There were a lot of repeating patterns and I cloned out many of them but it still looked fake. I selected and copied the whole area from the original image, pasting it on to a new layer. I clipped this layer to my nearly created grass. I desaturated the clipped layer, adjusted the white point with curves and set the blending to overlay. This replicates the lighting and shadows of the area and making it seem more natural.

Looking at the image I started to see a film poster. The house could be the setting of the film and I started thinking about a romantic comedy or a romantic film. With this in mind I considered making the picture feel dreamier.

I started by adding a lens flare to the top right on a new layer filled with black. I also set the blending of this layer to screen so only the light tones would be visible. I then added a bokeh stock image that I desaturated and also set to screen. 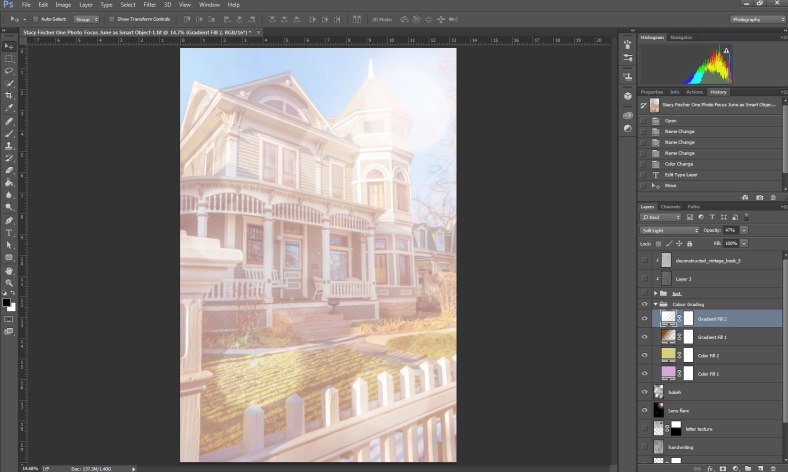 The more I thought about this being a film poster, I thought the film could be about writing letters, maybe a long distant relationship or maybe it is a magical house where letters travel though time. To try and incorporate the letter theme I added two textures. The first was an envelope and the second an actual letter. The envelope was placed at the top with a slight gradient on the mask to soften the bottom edge. The letter texture was place below the envelope. Both layers had a blending of multiply.

A film poster wouldn’t be a film poster without some information. I came up with the name Letters Home as it kind of sounded like a cliché. To link the film info to our forum, I added Stacy and Emilio as the main stars of the film. I used a template from Tip Squirrel for the film credits and included forum member’s names in the credits.
I used a blue green colour for the text as it complements the yellow and purple quite well.
To make the text curvy I used the arc option in the text menu with the rise arc. I used a handwriting font to keep the whole letter writing theme together.
I wanted some sort of texture for the text and I did this; first by creating a black layer and adding noise and setting the layer to overlay, clipping the layer to the text group. I then added a paper texture and clipped it as well to the text group, then set the blending to multiply.

I needed something to tie the letter writing theme of the film all together. I went looking for a stock image of someone writing. I found a picture of a woman writing which I extracted from the background. I then added it below the text and textures.

For me this was quite a fun image to create. While I was editing, I was looking at different film posters to give me inspiration on which direction to go in. I hope you like it as well.

Let me know your thoughts in the comment box below.

31 thoughts on “After Before Forum; Stacy Fischer”