Flikr has beaten Facebook to the #punch, days after Facebook announced its intention to enable hash tagging on its social platform, Flikr has already made changes on its platform. The change has taken place on Flikr’s mobile apps but is yet to be seen on the website version. The new #feature also joins retro filters and @ user names to keep up with the times.

The hash tags are clickable enabling a search function just like in other social media sites and apps. Flikr has been heavily promoting the change encouraging people to #theirimages.

This is not really a break through as you have been able to tag images for a while so why the evolution?
It seems that Flikr has been seen as outdated and overshadowed by apps like Instagram and 500px. Although there is a large community on Flikr it is not one that is growing and it needs a new way to integrate easily with users and the way they use other platforms.
For me it seems that Flikr is moving away from a photo sharing site and more towards a social media type platform with a photography emphasis. Or is this what Flikr was all along? Are they trying to threaten Facebooks dominance?
#watchthisspace

Snapseed dead on PC and Mac

RIP Snapseed (desktop app), Google has let you move on to pastures green.

Back last year Google purchased NikSoft and quickly put out Snapseed on the Play Store for free for users to download. This seemed like a ray of hope form the acquisition and that NikSoft would be able to continue with Google releasing products directly from its stores. When the purchase went through people thought that Google wanted NikSofts products to improve imaging on Google+ and it’s over services.

Google announced that it will no longer be selling or updating Snapseed and existing users can still contact them for support.

Beginning today we’ll no longer sell or provide updates for Snapseed Desktop for Macintosh and Windows. Existing customers will continue to be able to download the software and can contact us for support. We’ll continue to offer the Snapseed mobile app on IOS and Android for free.

Google is in the middle of a huge cut back program axing many programs and streamlining its services, for example moving people from Picasa web to Google+, and laying to rest the RSS Reader Google Reader.
Snapseed is still available in the IOS Store and the Play Store for mobile devices, but seeing how hard this cuts are falling the fate of NikSoft desktop Programs is still uncertain, especially since Nik has not updated any of its desktop applications since Google’s acquisition.

Marksta to introduces IPTC metadata to its app

In January Marksta was released on IOS to allow Iphoneographers to watermark their images, now the app will allow you to add basic metadata to image as well.

“Marksta has been designed originally for people who are shooting photos with their iPhone. But, there are a lot of people who are using the iPhone who don’t know about metadata……..They have no idea that IPTC actually exists. A lot of people don’t know that once they make a picture, they immediately own the copyright. The professional photographers, obviously, do and that’s why they have been waiting for a good IPTC app.”

With the app you will be able to add information into IPTC metadata fields from; copyright owner, to description, keywords, dates, and geolocation. The user also has the ability to create presets to apply to their images with the Exif data also being able to be show with a full screen map with GPS location.

Although Marsta is a young app, people are becoming more concerned with how their images are used and infringement to their copyright, in parallel with the rise of smartphone photography this is in my opinion another step in the right direction.

Learn photography from the best of the best 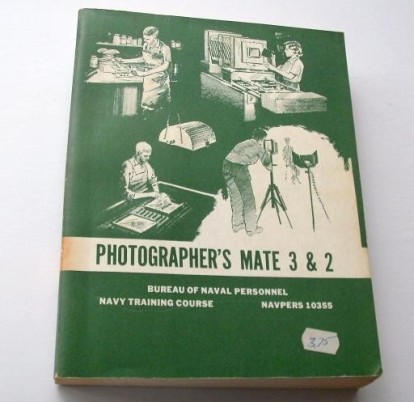 The US Navy at one time trained everyone from photographers to journalists to draughtsmen. All arms of the arms services also trained their own men. Now the training takes place in a universal school  for all services. Even with advancements in technology, the training from the old school manual is still reverent today.

Now online you can take part in the old course as the books have become available on line. The books covers all that you would expect to learn from light to optics, film sensitivity as well as assignments.  The book is available here  to download.