Shooting in Raw, if available, is the best practise for a modern digital photographer, even though some will still ague against it. For smartphone users it has become the habit to use filter based editors to make their images impressive and shareable.

For IPhone users there is now a new option. Shoot raw and edit. Hey cool, the ability of my IPhone and the power of Raw.

The App “Digital Negative”, has a similar user interface as that of other camera IOS apps. It spits out 18mb files which, are considerably larger than the standard file size. You can save the file as a jpeg, tiff or dng. The tiff file though cannot be opened by Photoshop.

When the DNG file is opened there is an amazing shock. The light balance is all over the place, the image is filled with artefacts and the colours are crazy. This could be due to the IPhone still processing parts of the file.
A raw image is the uncompressed file that is saved before the camera makes changes and compresses the file to Jpeg or Tiff.

For smartphone users the app is a nod in the right direction, as it would be ace to take a picture on my phone that is raw and then be able to edit it without using filters.
Not that I am saying filters are bad, but it is getting a bit tired now.

How much value has your camera lost?

It is said that when you drive a car off the sales lot it has lost half of its value.
This is something that we do think about when we are paying a lot of money for anything,
Is it value for money?  How long will it last? 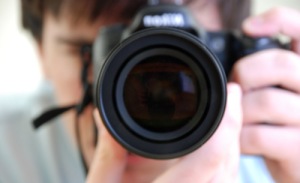 These questions are particularly relevant as tech companies are spitting out yearly replacement models and in Apples case sometimes 6 monthly.

A study has been done into the depreciation value of DSLR cameras (although all the cameras are Canon in the study, you could hypothesise it would be similar for other manufactures with a similar model range).
The study was conducted by the market research company Terapeak. The company used a algorithm in ebay to track the sale prices of four of Canons cameras; 1Dx (MSRP $6,799), 5D MKIII ( MSRP $3,499), 6D (MSRP $2,099) and 650D (MSRP $850). The apples to apples comparison in price was taken over a twelve month period.

The results show some interesting data and something’s we thought we knew already. 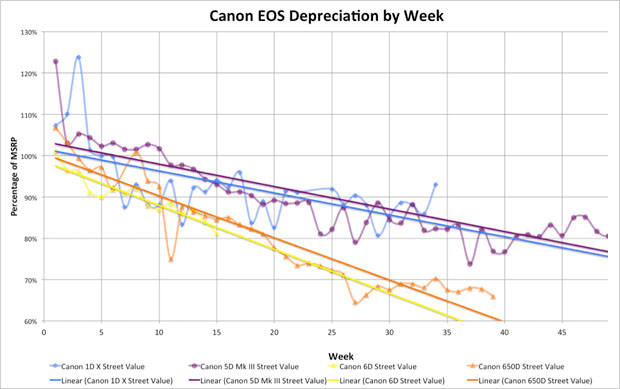 The cheaper camera models do depreciate quicker than more expensive models. The 6D and 650D both within 35-40 weeks had lost 40% of their value. This is quite interesting as the 6D is considered a pro-consumer camera in the same category as the 5D MK III but it depreciates like a 650D entry level consumer DSLR.

The 1Dx and 5D MK III held there value quite well. After 28 weeks they only lost about 10% of their value and by the end of the twelve months depreciating by about 25%.

What does this information tell us, in real terms,

1. Just by purchasing a more expensive camera like the 6D does not guarantee that it will hold its value. In the case of the 6D it does seem that it could have been considered by consumers to be the cheaper option compared to the 5D MK III and this drove its price down.
2. If you want your camera body to hold its value buy the higher class camera (the pro camera over the amateur).

This second point seems to conflict with the first result, but what I am saying is that if you choose a Pro model the values will stay longer than if you buy the higher priced amateur camera. Sometimes paying a little bit more can be worth it.

Shutterfly and Kodak in dispute over memoires.

I have written about Kodak before and really don’t want to cover old ground , but they are bankrupt (in the American sense not the British). They have to sell off parts of the company to break free of being in the red. This asset sale has included its film business (“they are not stopping film production, they are selling the business” so says the PR talk).

Last year Shutterfly purchased Kodak Gallery for $23.8m.Kodak Gallery was Kodak’s consumer online digital photography web site. It featured online photo storage, sharing, viewing on a mobile phone, getting Kodak prints of digital pictures, and creating personalized photo gifts. As of July 2012 all photos were moved to Shutterfly and everybody was happy.

Well apparently not. Shutterfly is taking Kodak to court over its app “My Kodak Moments”. Shutterfly is claiming that Kodak has set up a competing business to Shutterfly (Formerly Kodak Gallery) which is prohibited by the terms of the sale and that the app uses technology found in the former Kodak Gallery.

Kodak Moments allows users to take their Facebook images and create picture books. Though this could be the opening for other printable products.

This is not a good time for Kodak having to go back to court as they have just closed a $848m finance deal to get them back out of bankruptcy by mid-year.

This does smell kind of wrong. If you have sold part of your company it is a little cheeky to set that up again under a different name to compete and especially when Kodak Galley went through two name changes in its life with Kodak before being sold. It could be easy for a consumer to be misled.

Kodak have yet to raise their head above the trenches to say anything, but in my experience with Kodak they can be quite canny about what they will say to a blogger and then what they will say a few days later in a press release.