All images need sharpening, especially if they are taken in Raw format. Normally when a picture is taken there is a small amount of “capture sharpening “applied by the camera before the image is compressed to a Jpeg. If you shoot Raw then the capture sharpening needs to be done in your Raw conversion software (eg. Adobe Camera Raw).
You could say sharpening is like focusing the negative in the darkroom enlarger.

Well sharpening makes an image sharp, not witting or pointed, but to take soft areas of an image and turn them into areas that pop out at you. This is not the same as focusing which you do with the camera and sharpening does not make areas that are out of focus and make them in focus. But it can take soft focus areas and make them more defined.
All software sharpens images at in a similar way taking parts of an image where there is a significant change in colour and luminosity ( the edges) and applies enhanced contrast to the areas either side of the edge making the darker pixels darker and the lighter pixels lighter. This parlour trick makes the image seem sharp to human eyes.

The best method for sharpening

There are many different methods for sharpening and some people love one method over another. Some people believe there method is best but I would say that the method you choose must be good for you and for your image.

Sharpen and Sharpen more are generic filters with a one click approach and no real control.

Unsharp Mask is a well evolved filter that can be found in the sharpen filter menu. It offers a lot different possibilities through three sliders.

Amount               This controls how much you want to control the contrast of pixels at the edge. If you apply too much you can get halos along the edges, and not enough you will see very little affect. With higher resolution images a value of between 150-300% would be about right depending on taste.

Radius                   The radius states how many pixels will be affected by the contrast enhancement along the edge. The higher the setting the wider the edge effects become making the sharpening more pronounced. For sharpening high resolution image of around 12-18 megapixels will be sharpened best somewhere between 2-3 pixels.

Threshold            Threshold is a fall back protection that ensures not ever edge is sharpened. The value set determines how different the difference between pixels needs to be before defining it as an edge. In other words the greater the threshold the less sharpening will occur in the image. In most cases around 3 or 4 pixels will be sufficient.

Smart sharpen is a very user friendly filter and has a huge number of options that does not just let you control the amount of sharpening but also the algorithm of the filter. The filter also allows you to set different amount of sharpening for the shadows and the highlights, but not super local adjustments.
The filter has two modes basic and advance. The advance mode will allow you to control the amount of the overall sharpening as well as the shadows and highlights independently. 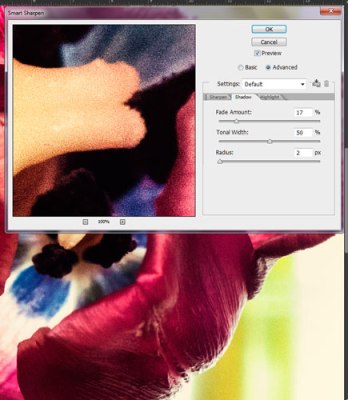 Sharpen                               Within sharpen you have amount and radius that work in the same way as with unsharp mask. The remove option allows you to “remove” (lessen) blur in an image with a choice between Gaussian Blur, Lens Blur and Motion Blur. More acute option makes the sharpening, well, more acute.

Shadow /Highlight
The shadow and highlight options are the same but work on the shadows or the highlights.
Fade Amount allows you to control the amount of sharpening in the shadow/highlight area.
Tonal Width allows you to control the range of tones that are defined as shadow or as highlights.
Radius defines the radius around a pixel that is used to determine whether it is shadow or a highlight.

Smart sharpen is the most powerful sharpening filter of them all, though it has two major disadvantages, It takes a lot of processor power and will hog your ram. The ram hog is worse when working in a 32bit environment because it will not matter how much ram you have Photoshop will only recognise 3gb. 64bit is in my opinion is the optimal environment and the difference is huge. Obviously to run Photoshop as 64bit you need a 64bit OS.

Outside of the filter menu there is High Pass sharpening. This is a favourite of a lot of people due to the way you can make small adjustments later with not much effort.

First you must duplicate the layer you want to be sharpened. Once duplicated go Filter-Other-High Pass. The High Pass filter has one option, radius, which has the same effect as radius in Unsharp Mask. The larger the value the more the image is sharpened and lower the less sharpened. A radius of around 10 is about right for most images.

You can now set the blending of the layer to Overlay. And the image is sharpened.

Of course the overal strength can be controlled by the opacity of the layer.

As you can see sharpening is the last step in my work flow after noise reduction.

When we sharpen, we sharpen on a pixel basis and different size images require different amounts of sharpening. A pixel of a 5”x4” image is half the size of a 10”x8”, if they have the same resolution. As a general rule, a smaller image requires more sharpening than a larger image. This means that you should sharpen for the output size.

To sharpen for output can drastically change your workflow, though it is advised that you sharpen an image at the end of a work flow and if you use a smart object for filter adjustments you can change the amount of sharpening before you output (print, ready for the web) the image. Sharpening at the end of you workflow also means that you will not sharpen any noise as well as the noise reduction in a further step not reducing the sharpness of the image.

Another approach when sharpening an image is to view the image at print size, just using the preview window at 100%. The reason for this is that you can see the effect of the sharpening on the image.
This is assuming that Photoshop allows you to see an image at print size. Photoshop defaults to 72ppi and most modern screens have a higher resolution.
There is an easy way to check your screen resolution. First check the pixel height/width and then measure the height/width of your screen. Next divide the number of pixels by the measured length. For example by screen is 1280 pixels high and 12 inches high, 1024/12=85.3, the resolution of my screen is 85ppi (rounding down). This means that if Photoshop is defaulting to 72ppi my images will not be displayed at print size when selected. 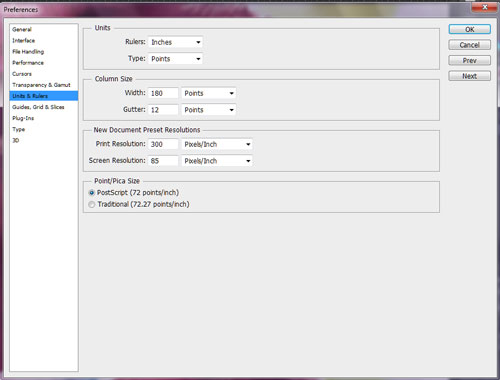 Another problem can be nothing to do with you image but your printer. There is an effect called ink bleed, this is when ink on the paper flows into one another. This effect is different from printer to printer and can be lessened by using fast drying paper. Due to the problem over sharpening your image for printing is the best option.

If using a smart object there is no worry about over or under sharpening as you can change the settings at a later date, as the filter can be reedited. If however you merge all your layers before saving, this can be an issue.

It can be said that it is better to under sharpen that to over. If you sharpen an image and it is not sharp enough (under sharpen) then you can easily add a little bit more. On the other had if an image is over sharpened then you can’t reverse the edit.

I would recommend using either a smart object to sharpen so you can edit again later. Using the the high pass method you can easily reduplicate the layer to be sharpened and apply the filter at a different intensity.

One thought on “Wow that is Sharp”